If there’s further proof that prices are not likely to fall drastically, it would be the latest monthly update from CoreLogic, which showed that the declines are actually slowing down.

Dwelling values across capital cities are starting to fare better, with the rate of decline slowing down except in Melbourne. On a national level, dwelling prices declined by only 0.4% in August, down from the 0.6% drop recorded in the previous month.

While housing values continued to trend lower from their pre-COVID highs, the rate of decline has already moderated from a macro perspective, said Tim Lawless, head of research at CoreLogic.

Across capital cities, dwelling prices declined by 0.5% on average. This drop was driven by the sustained 1.2% decrease in Melbourne prices.

“Following a similar decline in July, Melbourne home values fell by 1.2% in August, the largest fall recorded amongst the capital cities, demonstrating the impact of a worse viral outbreak relative to other cities, along with a larger demand-side impact from stalled overseas migration. Through the COVID period to date, Melbourne home values have fallen by 4.6%,” Lawless said.

Lawless said the performance of housing markets are “intrinsically linked” with the extent of social distancing policies and border closures.

“It’s not surprising to see Melbourne as the weakest housing market considering the extent of the virus outbreak, and subsequent restrictions, which have weakened the economic performance of Victoria,” he said.

Other capital cities performed better, with the declines in Sydney and Brisbane moderating to 0.5% and 0.1%, respectively. Darwin posted the highest gains in prices at 1%, followed by Canberra at 0.5% and Hobart at 0.1%. Adelaide and Perth maintained their dwelling values in the month.

Regional markets were able to maintain their median dwelling values. However, it is crucial to note that the regional markets’ pre-COVID-19 momentum has already slowed down. In fact, prices in these markets have been flat since May.

Lawless said regional markets’ limited exposure to net overseas migration has helped them maintain their standing amid the pandemic.

“Regional markets may also be appealing for their relatively low density and lower price points. The normalisation of remote work through the pandemic could make proximity to major cities less of a factor in home purchasing decisions,” Lawless said.

Check out the table below to see the price performance of capital city markets in August: 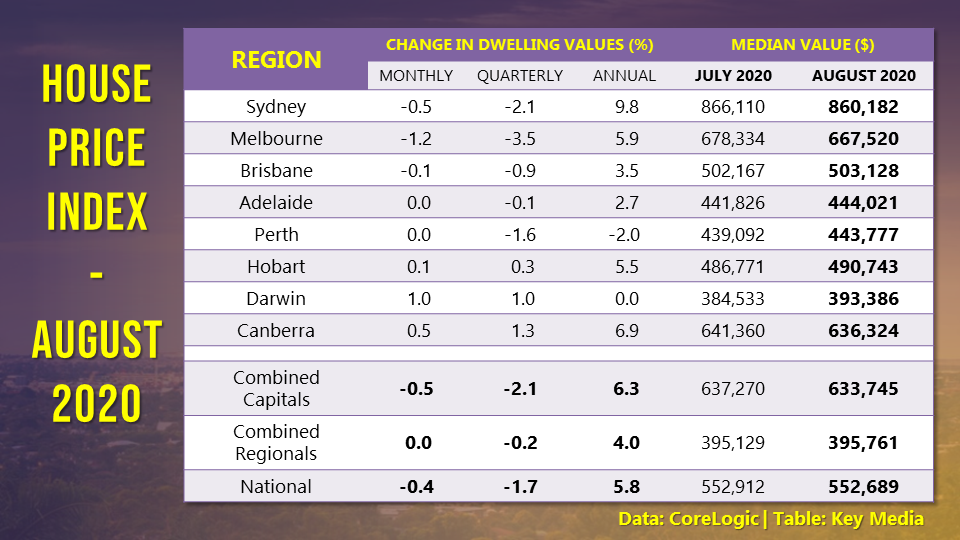